This is the third guest post by Will Varnam aka @rugged_style about vintage military style. You can check out the first two instalments here.

Trendsetters and tastemakers are important to any industry.

In this third instalment of my series about vintage military garments, I speak to Tomas Huveneers, one half of Amsterdam-based vintage store, Concrete Matter.

Tomas and his business partner, Jacob, have pioneered the adoption of military style through their storefront and Instagram presence.

I met Tomas at Amsterdam Denim Days (you can read my recap of the event here) to hear his thoughts on why military design has had such an impact on contemporary menswear. You’ll also get four examples of vintage military garments that work particularly well with denim.

Although Concrete Matter has only been selling vintage garments for a couple years, its imprint has had an undeniable impact on the styling of their customers and the popularity of military style in Amsterdam.

The Store and Its Philosophy

As many businesses start out, Concrete Matter had its humble beginnings as a web store. Initially selling taxidermy, pocket knives, Stanley thermoses and lifestyle accessories, there was no clothing at this stage.

More of a hobby than a viable business, Jacob and Tomas worked with a friend who had a graphic design studio. A pop-up shop soon followed, which was well received, and an old Amsterdam storefront became available shortly afterwards. Feeling like a natural progression, Tomas stopped working in graphic design and Concrete Matter soon had a physical space.

There had always been an emphasis on items with history and heritage for Concrete Matter: Items that were well-made and able to be cascaded down generations. Items that were able to tell a story.

This became the guiding principle and philosophy of the store, from pencils and gloves to home accessories and lifestyle items. Jacob and Tomas wanted customers to be excited about their purchases and understand their investment in a quality product.

The Military Style and It’s Adoption

One thing is very clear from speaking with Tomas; Concrete Matter is not driven by seasonal trends or ‘what’s hot’ on the runway. There’s a grounding in classic design and the encouragement of a style which is utilitarian and uniform.

Tomas proudly states that the store tries to be unique and that they do “our own thing” without compromise. Honestly and humbly, Tomas does acknowledges that some items or styles, which are adopted by the store, might not be for everyone. Some people might not understand their styling and it might not be popular with the average consumer.

But what Concrete Matter is confident in, is creating one’s own style. From vintage military Dutch overshirts and camouflage overalls to baggy quilted liners and snow smocks, Tomas wants customers to step outside of the box and wear garments they are drawn to—even if they can’t see themselves wearing them to begin with.

Many customers are tourists, but that is steadily changing. As Concrete Matter continues to forge its reputation as a purveyor of high-quality vintage military garments (and other items which can tell a story), the store has become a destination in itself.

The Garments and Their Impact

The average customer is usually aged between 30-65, and may visit the store in search of a classic field jacket or a high-end vintage military collectable.

Tomas himself is drawn towards the classics like the humble M65 or M51 Field Jacket or the vintage fatigue shirt or chino. However, he likes to experiment with more unusual military garments which some style enthusiasts may shy away from because they’re unusual or a statement.

When asked about the impact of military garment design and why it remains popular in contemporary menswear, Tomas feels that this is largely down to colour and adoption by popular culture. Being able to combine shades of green or khaki with most outfits, military garments are universal in this respect according to Tomas.

In addition, many popular designers such as Ralph Lauren have spearheaded the adoption of military style by the masses. This makes military garments and military style more appealing, especially to the younger consumer. Military style is ultimately recognizable.

Moving on to the marriage between military and denim, I asked Tomas how he sees the two fitting together: “Many armies have used denim over time” and the fact that “denim doesn’t have to be blue” has led to two genres becoming inseparable from a stylistic perspective.

It’s undeniable that the classic and timeless nature of military garments has also played a role in the popularity of military style.

Tomas notes that the M65 and M51 field jackets are perhaps the most popular with customers of Concrete Matter, whilst more exotic garments like the Swedish Motorcycle jackets receive a lot of attention, but not everyone is brave enough to wear one. Liners also prove popular with customers as they fuse a Japanese kimono style fit with an appealing olive drab colourway.

From a brief look inside the store or at Concrete Matter’s online shop, it’s easy to see that Jacob and Tomas must spend many hours searching for high-quality military garments.

“We have a couple of really good companies where stock comes from,” but “I want to travel more abroad and buy in bigger volumes,” Tomas notes. Whilst picking at flea markets does produce one or two good garments from time to time, it’s more economical to buy in bigger volumes.

He reflects that older items are getting more difficult to find, and it can be difficult to know if items are going to sell well or if the customer will respond expectedly. He’s encouraging people to find their own individual styles as far as vintage military goes; people can be too afraid—or lazy—to try a garment on. But when they do, they almost always purchase it. “Take your time and try things on,” is his motto, and wear garments that appeal to you.

Instagram has been instrumental for Concrete Matter when sharing their style vision. Tomas agrees that it has allowed customers to see how more unusual vintage military garments can be worn, which increases their understanding and can change their buying habits.

It’s clear from speaking with Tomas and looking at the curation of Concrete Matter that military style is not only a staple of contemporary menswear but something which is still being utilized in creative and ambitious ways.

It goes hand-in-hand with denim style, as the two are born out of utility and function. The two are not mutually exclusive. Whether you wear a vintage M65 Field Jacket, a rare paratrooper’s camouflage smock or a Ralph Lauren fatigue shirt, we can safely say that military garments have become a staple in our wardrobes.

If you’re thinking of adding some camouflage or olive drab to your outfit, check out the offerings of Concrete Matter below. I’ve highlighted a handful of military heavyweights that I think will compliment your favourite pair of selvedge jeans and moctoes.

This Dutch Marine Corps jacket borrows some design elements from the WWII US Marine Corps P44, being made from a sage green herringbone twill cotton, with a button closure and chest pockets.

Missing from its US counterpart, the Dutch version added two (very useful) lower hip pockets and simplified the construction of the jacket. This variant also features rank stripes on the sleeves and the Dutch Marine Corps emblem on the left chest pocket.

A great year-round layering piece, pair this with selvedge denim and wear it under a USN peacoat for Winter or some chinos, sneakers and a white t-shirt for summer.

It’s hard to beat a classic khaki chino. Arguably as iconic as the five pocket denim jean, the chino has been a military staple for decades. These French Army chinos from the 1950s have a double pleat front, belt loops, hip pockets and are made from mid-weight cotton. Perfect to pair with PF Flyers as shown by Tomas above.

Often intended to be worn under another garment such as a combat jacket or parka, the quilted liner is an unsung hero of the military world. This British military version features a button front and classic diamond quilted pattern.

Wear it oversized for a more Japanese vibe or throw on your favourite M65 over the top when you need to layer.

During WWII the US Army utilized olive drab herringbone cotton for a number of garments from overalls to caps and fatigue shirts. This example dates from mid-late WWII and is the classic fatigue shirt worn during by US GIs during the war and for many years afterwards. Featuring 13-star steel buttons and retaining its original insignia (likely from the 1950’s), it has two large chest pockets and will look great with some faded denim.

If you’d like to read more stories like this one, check out the previous posts about vintage military style here.

And if you’d like to get a heads up via email once a week about new blog posts, you can sign up for the free email newsletter. 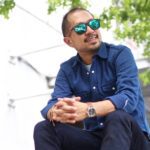 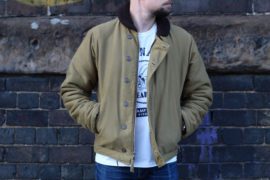 Attention on Deck: Fashion’s Adoption of the N1 Deck Jacket 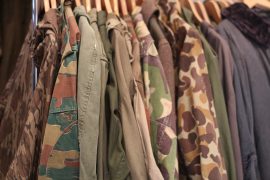 Dressed To Kill: The Impact of Vintage Military Design