… and Why Jeans Wouldn’t Be the Same Without Levi’s, Lee and Wrangler

This blog post about ‘the Big Three’ of jeans is an adapted excerpt from Blue Blooded, and it was written by co-author of the book, Josh Sims. If you don’t have Blue Blooded already, you can get it here.

Denim may have originated in France, but its history belongs to the United States, and to three companies in particular: Levi’s. Lee and Wrangler.

Together, they invented the modern conception of jeans. Over a span of more than 100 years, each also inspired a boom in denim as the definitive clothing of youth, leisure and fashion.

The story begins with Levi Strauss, a German-Jewish immigrant and San Francisco-based merchant who supplied clothes to miners trying their luck in the Gold Rush.

But the clothes weren’t made of denim: Strauss sold standard-fit “overalls”—so called because they were typically worn over one’s trousers—made from brown cotton duck. Thus began the evolution of an icon: Strauss would soon switch to the use of denim.

In 1873, Strauss spent $69 for the patent to another immigrant’s idea for making these work trousers stronger, by riveting the most critical points in their construction.

We do not doubt that his manufacture will become quite popular amongst our working men,” noted the June edition of the Pacific Rural Press that year. “Nothing looks more slouchy in a workman than to see his pockets ripped open and hanging down.”

The archetypal pair of denim jeans edged closer—and this in large part because a good idea is worth copying, as it was by numerous small makers. Strauss needed branding to distinguish his product from theirs.

By the 1890s, the characteristics of a pair of Levi’s that might be recognisable today were all in place: the orange-tan stitching, the arcuate on the back pocket, the rivets, the watch or coin pocket, the lot-numbering system, and the oft-referenced two-horse leather patch.

The timing is significant: that was the year the patent on the rivet ran out, making the establishment of a strong brand identity all the more important.

In a nation associated with big business and consumerism, the early history of jeans is partly one of protecting one’s turf and building distinct markets.

Take Henry David Lee, a Kansas-based kerosene and canned goods merchant. He had begun to sell work clothes produced by other manufacturers. But when the deal no longer suited him, he started to make his own, with a specific market in mind.

Whereas Levi’s had cornered the market for miners— and, with the Gold Rush over, the brand had begun to court cattlemen and farmers—Lee saw an opportunity to service the workers of the newly industrialised nation.

His breakthrough product was the Lee Union-All—a denim coverall launched in 1913 and quickly adopted by factory workers and mechanics. Suitably, his was a more industrialised, progressive product: it was Lee who created the tougher, yarn-twisted jelt denim in 1925, and who introduced the first zip fly on jeans the following year.

In fact, when Levi’s began selling its 501 model in the East—which it did not do until around 1954—it had to introduce a version with a zipper, as shoppers there were largely unfamiliar with button flies.

Similarly, Wrangler was also developed to meet a perceived need. With industrialisation came population growth, and with it came a need for more meat. America witnessed a huge boom in ranching throughout the first half of the twentieth century.

The Blue Bell Overall Co. seized the chance to outfit the professional cowboy. Blue Bell—the name adopted by C. C. Hudson’s Hudson Overall Company in 1919—had already made a major contribution to denim history by introducing the first workwear made of sanforized fabric.

In 1943, it acquired the Casey Jones Work-Clothes Company, including one of its underused brand names: Wrangler. So the company then hired Bernard Lichtenstein—a Polish tailor who had worked with ranchers—to design jeans with them specifically in mind, which would carry the Wrangler name.

Levi’s and Lee had set their own benchmarks, too, of course. Certainly, the same proprietary attitude would help de ne each brand’s distinctive products—those which, thanks to their place in history, and the endless knock-off (or nearly knock-off) products they have inspired, have come to be regarded as icons.

Levi’s had its 501 jeans— arguably the jeans blueprint from which all others derive—while Lee had its 101 jeans.

Levi’s had its Type I, Type II, and Type III (or Trucker) jackets; Lee had its 101J Slim, blanket-lined Storm Rider, and Loco jackets, the latter targeting the railroad workers of heavy industry. The list goes on.

This is not to say there were not attempts to steal market shares: Wrangler’s arrival was a direct attempt to squeeze out Lee’s 101 jeans, a design originally launched as ‘Cowboy Pants.’

Levi’s added its red tab to the right back pocket in 1936, having found that its arcuate—which wouldn’t be trademarked until 1943 or even applied uniformly until 1947—was being widely copied. 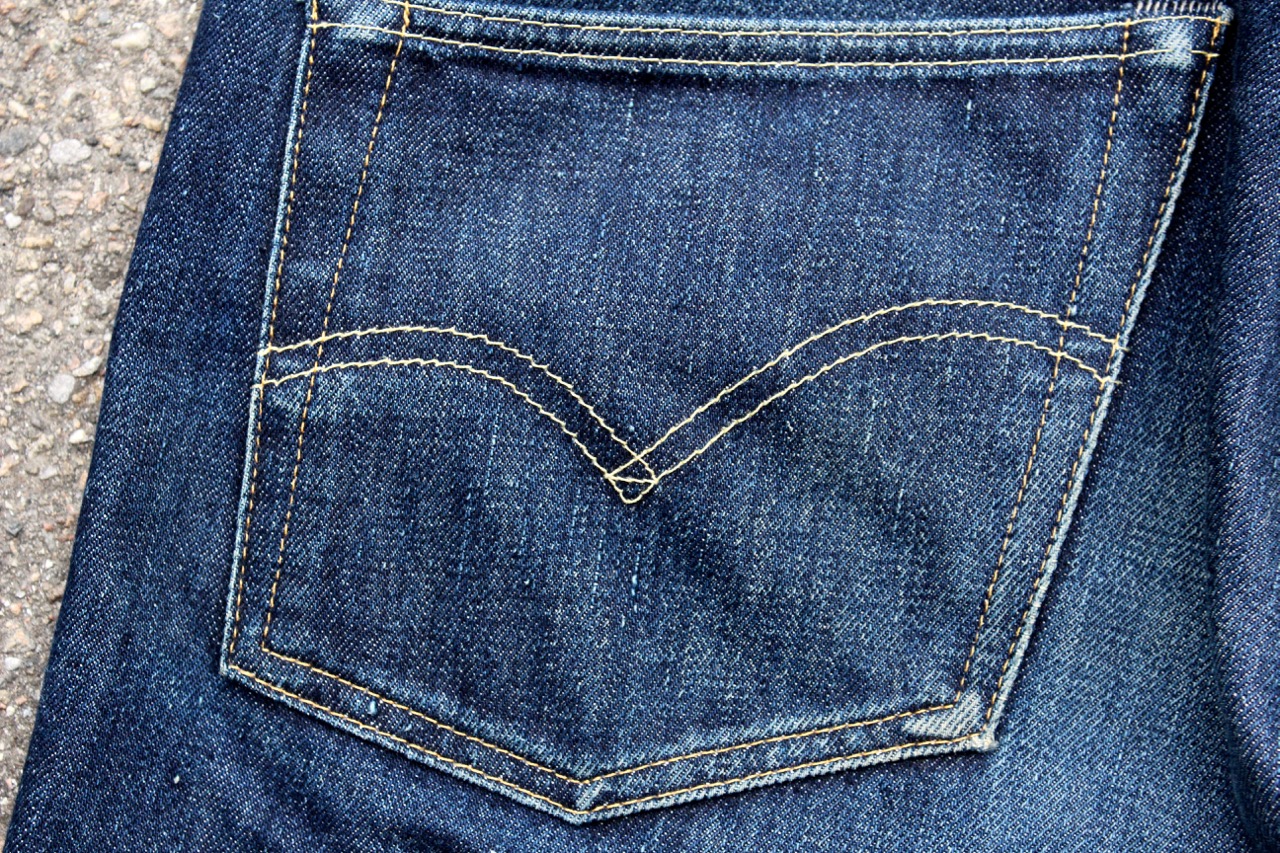 Lee, for instance, had used an arcuate since 1926, switching to its “lazy S” design the year after Levi’s trademarked its design.

Competition also encouraged a general readiness to adapt products to changing consumer needs. Levi’s added belt loops to its overalls in 1922, as the wearing of suspenders fell out of fashion.

After customers complained of the damage caused by the exposed back pocket rivets, Levi’s covered them in 1937; a decade later, Wrangler distinguished themselves by flattening theirs.

Denim in a New Age

The arrival of Wrangler, shortly after the end of the Second World War, also heralded a new era for all three brands: the beginnings of denim’s move out of the working world and, slowly, into that of leisure.

A postwar surplus of cheap denim goods made jeans a ready staple for a population that had faced rationing for several years, even if that population was also about to experience arguably the greatest consumer boom in history.

But while denim was still regarded with some suspicion by a conservative establishment, which equated it with manual labour—Elvis famously refused to wear jeans for all but promotional purposes because he saw them as a symbol of the poverty of his childhood—the new youth culture had no such qualms.

It would take almost a decade, but the appearance of James Dean in East of Eden and of Marlon Brando in The Wild One, both released in 1954, created a whole new world for Levi’s, Lee, and Wrangler to sell in. It was the beginning of an entirely new perception of denim in general large.

“The Jeans that Built America”—Lee’s early slogan— quickly transmuted into “Comfort Clothes for Work and Play.” Jeans were, as one 1950s ad for Lady Levi’s had it, “right for leisure.”

It’s telling that the very word “jeans” was a youth creation: until then, jeans had been a colloquial term referring to denim trousers for children. Certainly, image became more important than ever.

The prewar age of utilitarian product development turned into a postwar age that emphasised product promotion and fashion awareness to the extent that, by 1970, Lee had ceased making workwear at all.

In fact, work had come to be a much less strenuous business for many jeans wearers. This, instead, was the age of Sta-Prest denim trousers from Lee, or the Avondale polyester/cotton “smooth” fabric created by Wrangler.

It was the age of impractical but trend-baiting styles like bell-bottoms and of promotions like the Denim Art Contest that Levi’s sponsored in 1973, which encouraged people to send in pictures of their self- embroidered, painted, beaded, and even sequined jeans.

This was a new age of smart jeans, comfortable jeans, fashionable jeans, and even sexy jeans. Just around the corner, after all, was an impending boom in denim brands—from Jesus Jeans to Jordache, from Europe and the Far East—that felt no need to underscore a heritage that proved their products’ durability or functionality.

Never mind the raw denim—it was the competition for the fashion dollar that Levi’s, Lee, and Wrangler were about to discover was very stiff indeed. 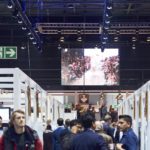 How to Source for the 3 Sectors of the Jeans Business 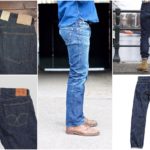 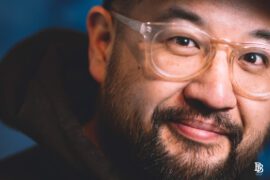 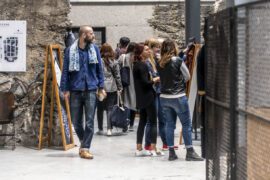 How to Spot Vintage Denim with Wouter Munnichs (S03E02)