The Myths of These Five Brands Cradled Japan’s Denim Industry

These are the pioneers of Japanese denim and builders of an internationally renowned craft industry. Like the Big Three in the United States, these Japanese makers came to be known as none other than the Osaka Five.

The story of the rise of the Osaka Five is confused by myths and contradictions.

Why, for example, did they congregate in Osaka?

Some have noted that it was simply a convenient centre for production, located in the middle of Ibara, a region known for denim, Kojima, known for its cutting and sewing, and Wakayama, the home of the loopwheeled sweatshirt.

Others argue that Osaka was ripe with vintage shops, and so seemed to have a ready market. Ask someone else and you get another story.

Japan had grown cotton in the nearby Okayama area for a long time and the factories there are good at sewing thick fabrics, and in fact a lot of them had contracts as makers of school uniforms, which tend to be made of thick fabrics, too,” suggest Warehouse’s Kenji and Kenichi Shiotani—the sibling duo that founded the company.

Then there is the oft-repeated story that the legacy of the Osaka Five was founded on the importation of vintage Draper shuttle looms that Cone Denim had foolishly abandoned.

In fact, the Osaka Five brands concede that their products were built on old Japanese Toyoda looms—the Levi’s story just lends the whole tale an added touch of romance.

I’m not sure that anyone bought looms from Levi’s,” confesses Yuya Hisatani, of Studio D’Artisan—after all, Levi’s never actually owned any looms.

Mikiharu Tsujita of Fullcount agrees: the whole story is founded on plenty of “myths—but I do at least know that what we did was original for sure.”

The Tipping Point for the Osaka Five

What is clear is that the Osaka Five comprised a group of denim enthusiasts, some of whom knew each other, all of whom recognised that there was a business opportunity.

Levi’s were getting expensive in Japan and the high demand among collectors and the otaku—the Japanese term for people with an obsessive attention to detail, sartorial or otherwise—was seeing the supply of vintage jeans running worryingly low.

Americana was big in Japan: it was, at least relative to the avant-garde Japanese designers then starting to make their mark, an affordable fashion underpinned by the collector mentality.

Besides, there was a sense that they could use Japanese weaving and dyeing skills to produce jeans that were actually better than those being made in America at the time—albeit still drawing inspiration from historic American denim.

“It’s part of the Japanese soul to want to try to make things better and better—it’s part of the traditional craftsman mindset here,” says Mikiharu Tsujita, the founder of Fullcount.

It was a simple idea, really: vintage denim was becoming very expensive, and even for someone going to America it was getting expensive, and harder to find. So we thought, ’Why don’t we make denim ourselves?’ Sometimes people think that the idea was just to make replica denim, like in the old days. And, yes, a vintage feel was the original idea, but the denim itself was genuinely original, too.”

As a result, by 1986, Studio D’Artisan—the name comes from the fact that founder Shigeharu Tagaki had been working for Pierre Cardin in Paris and wanted to bring back to Japan an element of that fashion city’s haute couture thinking—became the first of the Osaka Five to launch a pair of jeans.

The type DO1, an original contemporary classic design, is still made by the company today. Its leather patch may have parodied Levi’s—where the two horses are trying to pull a pair of jeans apart on a pair of Levi’s, Tagaki substituted pigs—but the model was the making of a minor revolution.

The jeans, replete with period details, including a buckle back, may have sold poorly at first, but this was the moment when the idea of premium, raw denim was invented. Or rather, remembered, having been sidetracked for the best part of 20 years.

We weren’t trying to follow any trends,” says Hisitani. “We just made classic jeans and added some small details taken from vintage examples, traditional Japanese clothing and other pieces to create something original. That also meant exploring both old and new ideas like different ways of dyeing the fabric.”

The door was open. Designer Yoshiyuki Hayashi created his Denime label in 1988—technically in Kobe but closely associated with the Osaka denim boom—focusing on a straight, fast-fading interpretation of vintage American jeans, notably Levi’s 501s from 1966.

In doing so, he set the tone for the many Japanese reproduction brands that would follow. Yet arguably it was Hidehiko Yamane—the next entrepreneur to enter the fray— who would prove more pivotal than either Studio D’Artisan’s Tagaki or Denime’s Hayashi.

After all, Yamane’s colleagues or employees, inspired by their experience working with him, would go on to create both Fullcount and Warehouse, arguably two of Japan’s most respected denim brands. But Yamane’s brand would also prove the most progressive—rapidly expanding beyond denim, and setting the pace for international visibility.

Yamane, a tailor by training, made his first few pairs of more Americana-inspired, “anti-fit” jeans in 1988, giving them to friends to gauge their reactions, which were positive. By 1991, he and his colleague—Mikiharu Tsujita, who would later go on to found Fullcount—quit their jobs to officially launch the denim company.

As the story goes, Yamane first named the venture Evis in homage to Ebisu, the Japanese god of prosperity—but also with a nod to his jeans’ inspiration, Levi’s. It was a nod that persuaded the US giant to take legal action, forcing Yamane to rename his brand ‘Evisu.’ 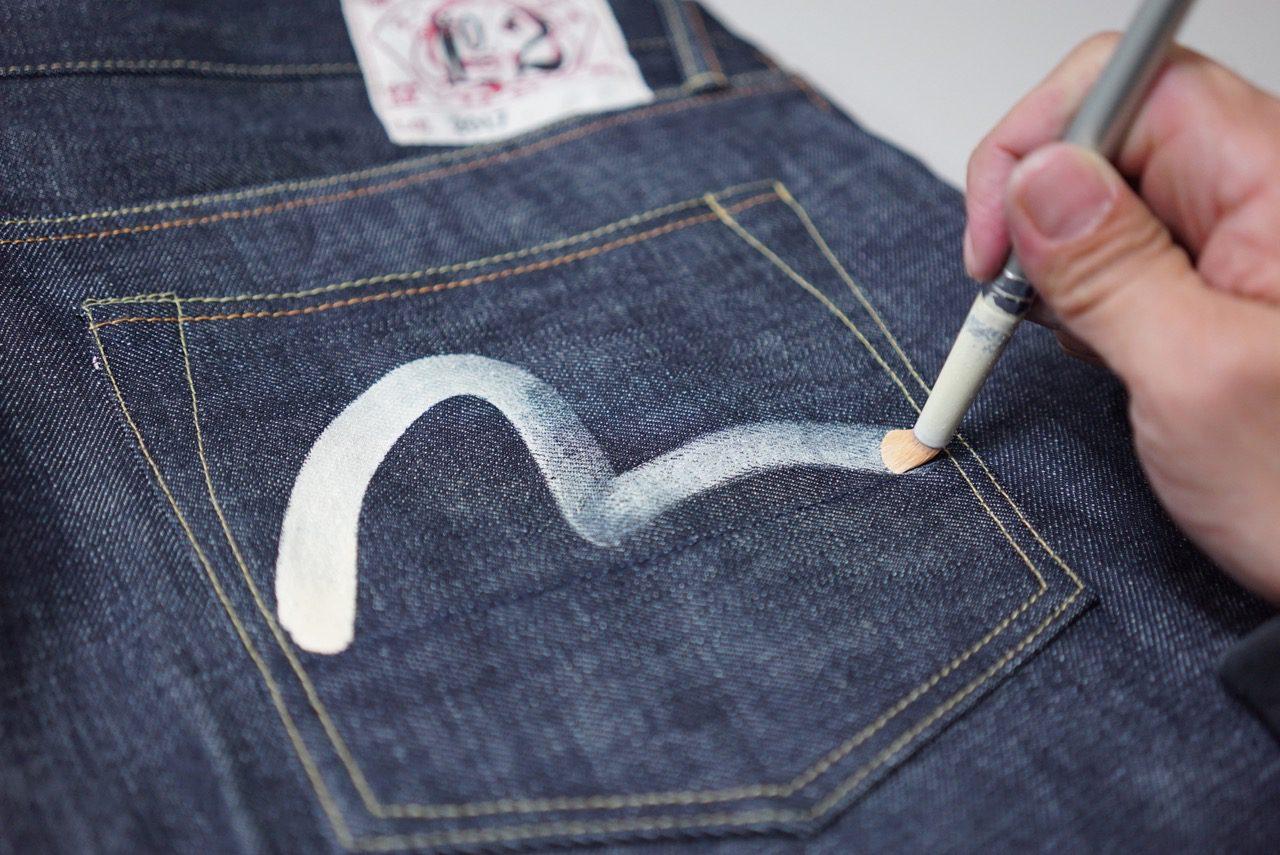 Yamane’s intention was just as cocksure, too: to reinvent jeans less as a throwaway commodity and more as a premium expression of craft.

Jeans used to be perceived as casualwear, something cheap that did not require much design focus. I wanted to make jeans that were expensive, specially designed to suit more individual tastes,” Yamane says candidly—and considering the price of jeans at the time, they were shockingly expensive. “So I approached the design and production of jeans as if they were a tailor-made product.”

It was telling of the level of obsession regarding denim among Japanese fans that Evisu would also choose, half-jokingly, to paint its arcuate on some pairs—an homage to Levi’s 1944 501 jeans, which featured a painted arcuate to comply with wartime thread rationing. That 501 model was in production for just nine months and so became one of the rarest on the collectors’ market.

Three years later, in 1994, Tsujita, looking to make a more purist, replica style of jeans, split from Yamane to launch Fullcount, making a name for his fledgling brand by pioneering the use Zimbabwean cotton, a harder-wearing long-staple variety close to the one used in the beloved vintage Levi’s.

A year later, in 1995, the Shiotanis—also onetime employees of Evisu—created Warehouse and launched its purist, stitch-counting, super-detailed Lot 1001 jeans, inspired by those of the 1940s and 1950s.

They also capitalised on the enduring Japanese ethos of the handmade, from generating texture out of the erratic yet carefully controlled “chatter” movement of the looms (what the mass-market denim industry would call “faults”) to an ability to reproduce vintage-style weave.

The timing for both companies could hardly have been better: the denim equivalent of the Gold Rush or Tulip Fever was on.

Fullcount, for example, was selling a reported 100,000 pairs a year in 1996—just two years after its launch; Evisu’s “seagull” paintwork became a global fashion phenomenon.

The Influence of the Osaka Five

They were not alone, of course—other Japanese textiles brands like 45RPM and Kapital were also exploring denim’s craft potential at the time, too.

But the Osaka Five had set in motion an international appreciation for Japanese denim and, more particularly, for selvedge denim. They gave rise to the idea that Japanese denim was the best money could buy.

It was thanks to them that other respected Japanese replica jeans makers—Samurai, Sugar Cane, Dry Bones, Strike Gold, Oni, Eternal, and many other niche players—were able to launch, each making a claim to a particular special manufacturing method, each able to sell itself based not just on its salute to American clothing history, but on its own particular aesthetic as well.

And as for the Osaka Five name? It’s not one the companies themselves recognise.

“Honestly, we don’t even actually use that term in Japan,” notes Yuya Hisatani of Studio D’Artisan.

We know we’re talked about as being part of that,” say Warehouse’s Kenji and Kenichi Shiotani, “but we can’t offer any comment beyond that because, well, we don’t really understand it. But, yes, we feel honored to be called part of the Osaka Five.”

If you want to learn more about how the Osaka Fives influenced the Japanese denim business, check out the amazing movie, Weaving Shibusa, which is presented by Self Edge and made by Devin Leisher, Erik Motta, and Mehdi Ahmadi.

It will be available online in the summer of 2017!

Learn More About the History of Denim and Jeans

You can learn a lot more about the history of denim and jeans in the series we’ve done on the topic.

If you want to learn how to use this knowledge when you’re selling jeans, take a look at the Denimhunters Academy, which we’re launching this year. Get FREE access to exclusive denim knowledge and training when you sign up today! (When you do, you’ll also be added to our newsletter.)

Here’s a teaser video for the Academy: 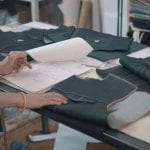 A Complete Overview of the 3 Stages of Making Jeans 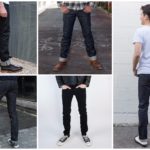 Not Without My Sons: &SONS Brand Profile 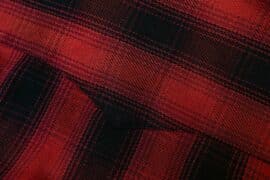 Falling for Flannel: The Best of Heavy and Well-Made Flannels 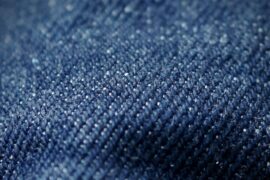